Wednesday, December 3
Maree woke me up today at 6 when the surgeons came on rounds. Dr. Potter and Dr. Sandeval came into the room after they all stood in the hall and talked about Faith, and told me that they'd be back around 8 to extubate her. I didn't really believe them...
When Jan came in at 7, she said she hadn't heard anything about it, and that there wasn't an order in the computer or anything... 8:00 came and went, and she said she was sure they'd come soon... I still wasn't holding my breath, and said something about the fact that they never do anything when they say they're going to.
I put a pretty new headband on Faith today. 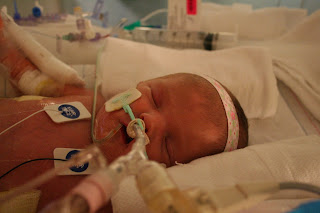 At 10, they still hadn't come, and no one had heard from them. I went and took a shower, and when I got back it was still more of the same. I saw the neonatology team on their rounds down the hall, and Jan said they hadn't been to see Faith yet.
I talked to one of the charge nurses today about getting a "primary" nursing team set up, because Dave and I are tired of not knowing what's going on, and some of the nurses are definitely better at keeping us informed than others. I'm also tired of having to explain things to nurses who've never had Faith before. So, from now on, we should pretty much have a rotation of the same nurses, and should always be better informed about everything.
When the neonatology team did come down, Dr. Hall came in and said that Faith would not be extubated, because even though her ventilator is on pretty much the lowest setting it can be, and she is taking usually 4 breaths on her own for every 1 that the machine gives her, she is still taking really shallow breaths that would probably not be effective enough to keep her lungs inflated. (Pretty much what I had wondered yesterday when the surgeons had said they planned to extubate her, but forgot to ask...)
Dr. Hall also said that they are going to check Faith's blood for her Immunoglobulin levels, because he thinks that they are probably low, due to the drainage from her chest. When they get the results back, they will add that protein to the Albumin that they are replacing already. This is very important, because if her Immunoglobulin levels are low, she will not be able to fight infection. We still hadn't heard anything from the surgeons when it was time to leave for my rheumatologist appointment.
That appointment was pretty disappointing, too... at the last appointment, she had told me about a medication called Plaquenil, that is supposed to be very helpful for the pain and fatigue that I have on a daily basis. It does have some side effects that need to be considered, but for most people, the relief that they get makes any side effects they experience well worth it. And it is a medication that is safe to take while breastfeeding, which is probably the most important factor in my decision to take anything right now.
After examining me today, she said that she wants to wait and see how my bloodwork comes back before deciding anything about treating me. She said that she thinks I probably have Fibromyalgia, but while I definitely show multiple major signs and symptoms of an autoimmune disease, she's not sure it's full-blown Lupus. She called it "undifferentiated connective tissue disease", and while she could use Plaquenil to treat that, she's not sure it's worth the side effects, and she thinks it might be more effective to treat the Fibromyalgia. Unfortunately, she has to research and decide if there are any medications that she can use to treat the Fibromyalgia that are safe for breastfeeding.
It was very disappointing to have thought for the past several months that I would finally get some relief after this appointment, and then find out today that I have to wait even longer... and to still not have definitive answers about what is wrong with me.
After my appointment, my mom and the boys left to go home for the weekend. Dave's parents will be here to visit tomorrow morning, and Dave will be here tomorrow night to stay until Tuesday morning.
When I got back to the hospital, there was still no word from the surgeons. Jan said they had entered some orders, but that no one had been up, and she hadn't talked to them at all. By that point, I was a little ticked that, once again, something had changed but the surgeons didn't think it was important to come and talk to me about it. This was now the third time something like this had happened... the first time was when the one surgeon had wanted to tap Faith's chest, and I waited all day for someone to come and do that, only to find out much later that Dr. Partrick had decided not to do it... and the second time was the other day, when everyone told me all day that she was fine, but then the next morning she needed a blood transfusion, and no doctor ever came to explain the reason for the transfusion.
Faith had a good day, she's down to 1 on her Fentanyl, and hasn't needed any extra pain meds all day. She is resting comfortably, but has also been a lot more awake today. I'll catch her sometimes with her eyes open, or she opens them while I'm talking to the nurse, and every now and then I see a little smile... I'm glad she can smile, even with all of what's going on (and even if they're not "real" smiles yet...) 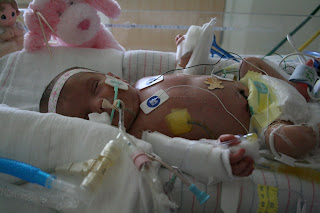 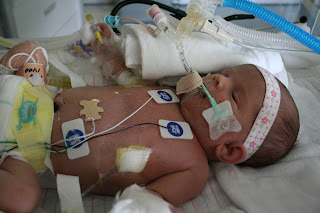 Finally, at 6:30, Dr. Potter came in to check on Faith and talk to me. For some reason, he is still pretty set on extubating her, and thinks that it will happen in the next few days. None of the nurses think it makes sense to do it while the chest tubes are still in, and even the respiratory therapist said that he thinks she is pretty much using the vent to do all the work, based on the little breaths that she is taking.
Dr. Potter said that it really is just a waiting game and a test of patience at this point. We need to hope and pray that this medicine works, because unfortunately there really aren't any other good options. He said that they would not even consider anything else until they gave her a month to stop draining. And from what I have read, it could potentially take that long for the drainage to stop...
Tuesday, December 2
Dr. Potter says they might extubate Faith tonight or tomorrow. I'm not sure I believe him, since they told us the same thing two weeks ago... 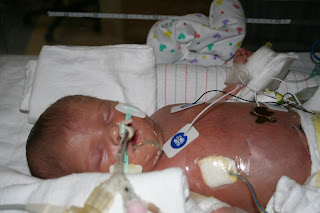 I have made it known that I am not happy with the fact that no one came to talk to me about the transfusion, and that it seems like unless I ask to see someone to answer questions, nobody comes. The nurses and neonatology team seem like they are very understanding and really want to make that better. The surgeons are kind of another story... Dr. Potter apologized that I felt that way... but didn't seem that sincere, he was really on the defensive.
Anyway, we'll see what happens... Our overnight nurse is Maree, she's very good and wakes me up to pump and to talk to the surgeons in the morning.
This is Faith's bulletin board. 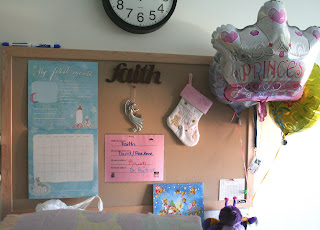 I'm so sorry for how you are treated by some of the Dr.'s. You should be helping to make all the decisions for the care of Faith. I can't believe they are not in there everyday talking to you about how Faith has improved, what to expect next and their plan. I would be just as frustrated as you. I am also sorry you didn't receive more answers from your own apt. Hang in there, stay strong and we are all here for you. (((HUGS)))
Jenae (birthchat friend)