Friday, December 5
Dave came down this morning, since the roads were bad last night. We were planning to go to the Mother's Milk Bank to learn about skim breastmilk, but ended up waiting around to see a doctor, since I never saw a "real" doctor the day before, and I wanted confirmation from a doctor that her drainage is, in fact, slowing down. I also wanted to know about the chest x-ray.
So, we waited until the neonatology team came by on rounds, and that gave us the opportunity not only to hear them talk about her case, but also to talk to Dr. Hall and hear what he thought. Dr. Hall said her drainage is slowing, but we're not necessarily out of the woods... He said the x-ray showed she had a fairly large pneumothorax in her right side, kind of at the bottom of her lung between her lung and her diaphragm. He also said they were going to test her Immunoglobulin levels again, because he figured they were low and she would need some of that replaced. He said they were cutting back on her replacements, only replacing half of what was coming off, so that they could have her TPN at a more acceptable level to be sure she's getting adequate nutrition.
After a quick lunch, Dave and I left to go to the Milk Bank. The ladies there were so nice, and showed us how to make the milk fat free. It is really an easy process- we use a large (60 mL) syringe, with a tube attached to the tip. We use milk that has been in the refrigerator and separated into the different layers, with the fat at the top (to learn, we used milk that someone had donated to them). We draw a small amount of air into the syringe, then push it out slowly as we put the tube into the bottle, through the fat layer, to keep any fat from being drawn into the tube. Once the tube is at the bottom of the bottle, where the fat-free milk is, we draw the milk up into the syringe, until the level of the milk in the bottle is down to where it's mostly just the fatty milk left. Then we empty the skim milk out of the syringe and into a fresh bottle, and pour an ounce off of that for testing. Each batch will be tested, and a slip like a cash register receipt prints out of their testing machine and shows the composition of the milk- fat content, protein, lactose, etc. On my first try, I got 0.00% fat!! I will have to have blood drawn to prove to them that I don't have any infectious diseases, but after that they will test my milk on their machine, and they did not say anything about charging us! :)
I already have a system worked out for how I will keep it all organized and be able to prove to the doctors that the milk is fat-free. I am sort of anticipating a little bit of a fight, getting Dr. Potter to give it to her, but I don't think he realizes what a fight he'll have if he tries to get me to back down on this. He said that I would have to be able to prove to him that the fat-free breastmilk is as good as the Portagen, the formula that they would put her on until she could tolerate the fat. But honestly, I think he will have to prove to me that the formula is as good as the breastmilk. It might have more calories, but I know otherwise that breastmilk is the absolute best thing she could be on, and he will have a hard time finding ANY information or research that would say anything to the contrary.
When we got back to the hospital, Tori told us that they had done a thoracentesis while we were out, to drain the air out of Faith's chest. They got 60 cc's of air. They did an x-ray shortly after we got back, and the x-ray showed that the air was gone and did not come back. 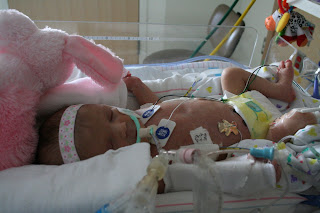 Dave and I went on a date last night, for the first time in awhile... we did dinner and a movie, and it was definitely a nice change of pace. There were a few movies we would have liked to see, but we decided that a comedy was the way to go, so we saw "Four Christmases". It was pretty funny. 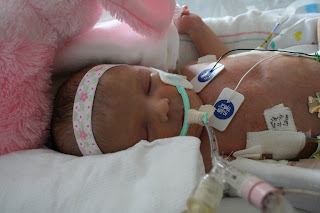 Everything seems to be slowly getting better... we will definitely still be here for awhile, at least a month, but I'm guessing closer to 6 more weeks... but she is having more and more good days. We are all cautiously optimistic that the medicine is working and the drainage will continue to slow, and eventually stop. Faith looks great, and seems much more comfortable. Thank you to everyone for continuing to pray for us and keep us in your thoughts.
Posted by Raeanne at 10:32 AM

"But honestly, I think he will have to prove to me that the formula is as good as the breastmilk."

Love this statement. Isn't that how it should be. Why are we always having to defend why breastmilk is better. Shouldn't one have to argue why they think it is OK to feed a baby formula. Breastmilk is always superior! Expecially for a baby in Faith's position breastmilk is vital. I remember reading that a new mom would tackle a mountain lion to protect her new baby...you tell him Mama!

What an interesting process to make the milk fat-free. I'm glad it is something you can participate in.

I'm so glad you and Dave were able to go out on a date! That is exactly what you two both deserve. It is the love of you both that created Faith.

What a sweet friend!! You send Raeanne the most positive messages and they make her feel so much better. Thank you for the care and concern.
Momma (Faith's grandma)