Two down, five to go!

Sunday, December 14
Faith lost 2 tubes today! Her cultures came back from all the tests they ran the other day; the ones from her breathing tube came back positive for bacteria, and the one from her PICC line came back positive for MRSA, but she's not septic. So, they took the PICC line out today around 2. They have her on antibiotics, specifically on one that is effective against MRSA. I know MRSA is kind of scary with the way they portray it in the news and stuff, but it must not be too big of a deal in reality, because no one seems terribly concerned about it. We've talked to 2 or 3 different people today to ask about it, and none of them are worried.
The other tube Faith lost was her breathing tube!! That's a huge step for her, because she's had that since her first surgery the night she was born, when they put the silo on. They took it out right around 3, and she is doing great. They put an oxygen tent over her for awhile to see how she does, but the respiratory therapist said that will probably be gone by shift change, especially if we want to hold her later.
Waiting for the respiratory therapist, getting ready to pull the tube out herself! 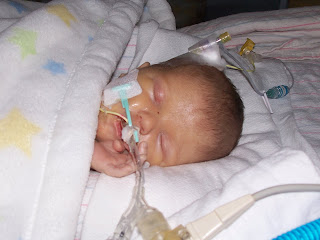 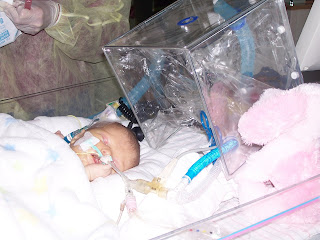 Practicing breathing on her own with the tube still in... 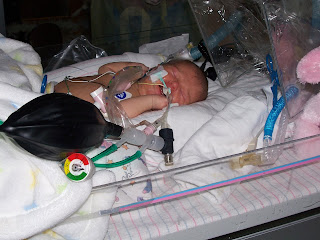 Our first time seeing her pretty little face with no breathing tube in over a month! 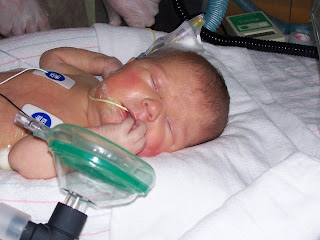 "Camping" in the oxygen tent 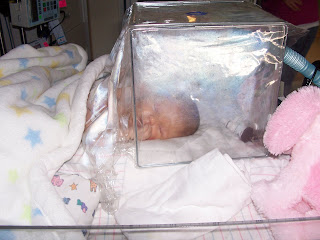 She's in there, I promise! 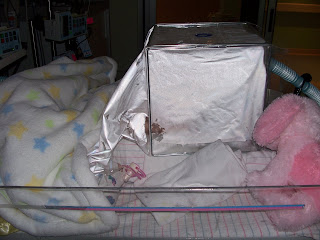 Dr. Potter came in a little while after it was out and said something about her getting her left chest tube taken out soon, too! Pretty soon, she'll probably have a little crib in here, and with no chest tubes and no breathing tube, we'll be able to hold her whenever we want, without help from the nurses!
We'll still be here awhile, because the feeding thing takes quite awhile, especially with the special considerations for her with the fat. I'm not sure if we'll be here until she's on full-fat feeds or not though, because when I asked the nutritionist that question, she said "Sometimes they'll send babies home on Portagen." I wanted to tell her that's not what I asked... but I think I'll just wait and ask Dr. Camath tomorrow how that works.
Anyway, things are definitely looking up! Thanks to everyone for continuing to keep us in your thoughts and prayers! The prayers are obviously working!!
Posted by Raeanne at 3:13 PM

YAY, YAY, YAY!!! NO, breathing tube!!! Faith might be the youngest baby yet to go camping. Faith is improving so quickly... keep it up Faith! I can't wait to see more pictures of you and Dave holding you little girl. What a beautiful little face she has!

She's so beautiful. I swear I can see the joy thru the camera when u are holding her!

That is so great!!! She is so beautiful. I will continue to pray for her.
Beckie
(Calvary Chapel)

Of COURSE she camps early-she is your's and David's daughter afterall right;) CONGRATULATIONS!!! This MADE my day when Dave told me last night! She is gorgeous!
Much love!
Aunt Amy & crew!

congratulations:) Every little step is such a huge milestone. Wishing I was there to see her.