Saturday, December 13
Faith is one month old today. She has had a great past few days, and is making awesome progress. Her drainage is gone on the left side, and minimal on the right, and when Dr. Sandeval came by yesterday, he said we'd probably start feeding her this weekend. That led to me making a bunch of phone calls, trying to figure out how to get the screening blood test results to the Milk Bank so I could get my milk tested, and then talking to the ladies at the Milk Bank to let them know the situation and find out if I could get the milk tested, and if not, if we could get some donor milk for her to have until we could test mine. Finally at about 4:15 yesterday afternoon we worked it out for Dave and I to go this morning and test what I had skimmed so far. 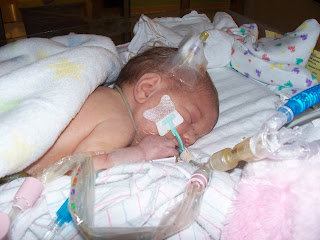 Dr. Partrick came around 7 last night to talk to me. He pretty much explained everything I already know about Faith's condition and progress, and where we'll go from here, and I explained to him that I understood all of that, and that it wasn't necessarily that I feel like I don't know what's going on, but more that the surgeons don't come see me every day. And I told him about talking to Dr. Potter last week to tell him I didn't feel like they were doing a good enough job keeping me informed, and that I haven't seen him since, and I told him that the female resident has an attitude problem. He explained to me that the residents aren't necessarily going to be pediatric surgeons when they're done, and I said that is probably a good thing for her... she should definitely only deal with people who are put under...
Dave got here around 9 last night. We had dinner and then relaxed for awhile before going to bed so we could get up early to test the milk. We went this morning at 9ish and had samples A through I tested. I was nervous about some of the earlier samples, not sure if they'd be skimmed enough for Faith to be able to have them, but every single batch was less than 1% fat! In fact, the highest fat sample was only 0.55% fat! So, now I know that I don't need to skim each batch 4-5 times, like I had been doing, since they can have up to 10% fat and I didn't even get close this time. Before we left, I set the samples out on the counter and took a picture- they are in order with the first batch (A) on the far right and the last batch (I) on the far left. 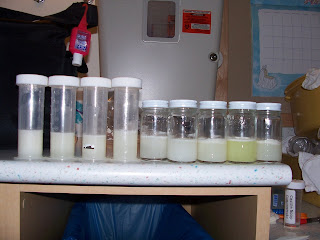 Faith is alternating now between her back and her tummy, changing every 4 hours. She really likes it on her tummy, and sleeps really well that way. They are weaning her Fentanyl down now, because she needs to have it lower (or off) in order to be extubated. They're also weaning her Octreotide, the medicine that has helped to stop the drainage; today they cut her dose of that in half. And, around 2 PM, Faith got to have her first feed of skim breastmilk! They are feeding her very slowly (3 mL over 3 hours); they call it "trophic" feeds, which pretty much means that they are just really testing out her system to make sure that what they give her through her mouth (or, directly into her stomach in this case) makes it all the way through and out the other end. Even small amounts though are a huge step in the right direction! As long as her drainage doesn't increase, they will gradually increase feeds. They are also talking about extubating her in the next couple of days, and I think she is actually finally ready to try it. 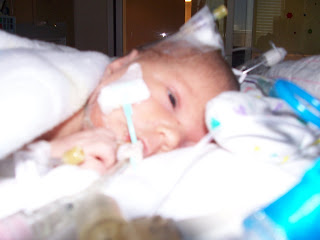 The road home from here will go like this: feeds, increasing as long as there's not more drainage, extubation, and, once the drainage is completely stopped and they know it isn't coming back, removing the chest tubes. Then they will keep working on feeds to get them increased until she can start drinking from a bottle, and eventually down the road she will be able to have the fat again, she can learn to breastfeed and get it straight from the source. 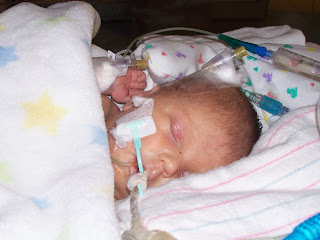 Well, we are going to try to make it to church in the morning, although the weather is changing and now it's snowing, so we might end up watching it on the computer again. Either way, it's time to get to bed and get some sleep! 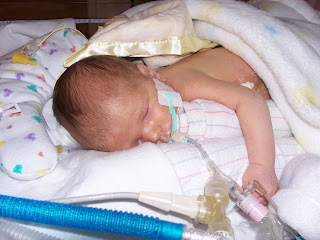 What wonderful, wonderful news!!! I think it is great that you have such a great sense of humor through all of this. What a strong woman and mama you are to stand up to these Dr.'s and residents....as how it should be. They are working for you and Faith.

I can see the light at the end of the tunnel and I am ecstatic that Faith is beginning feeds again! That is so wonderful that you were able to get so much fat out of your milk...you are not a perfectionist are you (ha, ha)? What a great example you are for future mama's who never knew it was possible to still breastfeed their babies!

I love the picture of her sticking her arm out from under the covers. What a sweet little arm. I also love the pictures of her being swaddled with her hat on. For some reason she looks less like a patient when she is wrapped up all cozy in a blanket and hat. And you got to hold her again!!! How wonderful. Good news all around. My thoughts are with your family always. (((HUGS))