Friday, March 13
Faith is four months old today! It's hard to believe... she's starting to act more and more like a four-month-old though, and I know from what I've read of others' experiences that once she's on the Omegaven and her liver starts getting better, she'll be even more like a "normal" baby.
She loves the little fishies on her swing (the mobile) and gets so mad when they stop! And she's started holding her hands together a lot more, playing with her fingers... and she's started trying to reach for toys hanging in front of her! She's started trying to roll over from back to tummy, and she's getting better with head control, but is probably a little behind there... I think once I can start wearing her more in the wrap that will help.
I am asking a million questions a day now, just trying to learn all of her stuff at a more gradual pace, rather than the cram-session that usually accompanies NICU discharge (or so I hear). I find it all intimidating, but I think it'll be ok... there's just SO much to remember, and some of the stuff (especially involving her Broviac) is SO important to keep her from getting an infection! She's made it 4 months now without ever having a line infection, which is amazing and wonderful, and I want to keep it that way!
Faith will be having her surgery at about 9:00 AM tomorrow. I've been searching all over for pictures of what her tube will look like, but can't find anything, and really can't picture myself what it will be like. Dr. Potter explained it yesterday (as best as Dr. Potter can explain anything!) and it will be like a regular G-tube with another tube like the one she has in her nose fed down it and to her intestine. I've seen pictures of the regular G-tube, but never anything quite like what he described.
When we were debating the G-tube before, everyone whose kids had them said they weren't a big deal, and when you eventually take it out the hole closes up and looks like another belly button... so I thought it was kind of funny, Faith doesn't have a "normal" belly button, and as it is now what the surgeons tried to give her probably won't look much like one with the extra times they've had to go in that incision, but she does have two scars from her chest tubes that look like belly buttons, and then she'll have a third one from the GJ-tube. So when she's older if anyone says anything about how she doesn't have a belly button (kids are mean!), she can come back and say she actually has three :)
I heard from the Boston social worker (Stephanie) today; I had emailed her asking if they had resources for getting from the airport to the hospital. Thinking about the flight, flying by myself with her and all of her "accessories", is kind of scary... please pray that I'll have peace with that. I'm not a big fan of flying anyway, and have only flown alone a couple of times, and have never flown with a baby... and I'll have to make sure that everything is timed right that she'll be all taken care of for meds and TPN and feeds and everything... her feeds last 4 hours, so I'll have to start a new one right before we leave and then the next one right after we land... and then I have to make sure that I've pumped right before we take off and pump again right after we land... I'm looking at booking a red-eye flight so that it's non-stop (it's the only non-stop we can afford), so we'll be leaving Denver around 11:30 PM and getting to Boston at about 5:00 AM. I find all of this slightly overwhelming... so many things to think about all at the same time!
I'm still waiting to hear from our case worker here (Jann), she's supposed to be talking to a case worker there today hopefully, to find out more about the insurance stuff, like how likely it is that they'll pay for everything if we go out there on our own. I'm holding off on booking our flight until I hear confirmation from her that the insurance most likely will pay. We know they might not pay for the Omegaven, but that's not a big deal b/c the hospital pays for it if the insurance doesn't, but theoretically they could deny everything else (labs, inpatient stay, etc) saying it has to do with the Omegaven. So I want to know they probably won't do that before I book the flight, since we can't afford to do this if the insurance won't pay anything.
Anyway, I could go on all day about all the little things that have me nervous/worried right now, but I won't, I'll just post some cute pictures instead :) Stay tuned tomorrow for cute pictures without the tape mustache!
Faith got all dressed up for her four month "birthday" :) 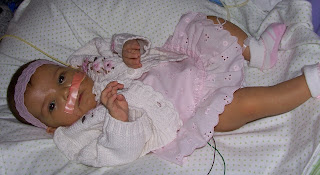 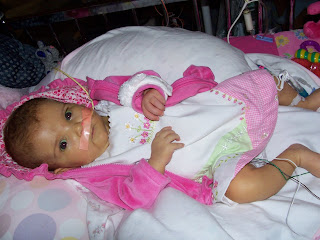 Oh goodness I can't even imagine taking a commercial flight with a baby like that. I would seriously look into medical flights covered by your insurance or something like http://www.angelflight.com/. I don't even know how you'd fly with all of the stuff she'd need during the flight. When we flew with oxygen it was a royal nightmare to arrange with talking with the airlines, papers needing to be signed, etc.

I hope it all goes smoothly getting to Boston.