Wednesday, February 11
The next few days are likely to be pretty boring, since we're back to just waiting at this point for Faith to heal and show us she's ready to start eating again. She is being kept comfortable with the help of pain meds, and hopefully in the next couple of days they'll be able to cut back on those meds as she starts to feel better. All the doctors ask if I have questions, and I just remind them we've already done this part quite a few times now...
When I woke up this morning, Faith had an IV in her head, and an oxygen cannula. Apparently the IV went in pretty easily on the first stick, and must not have bothered her too much, because I never heard a thing. They had to put it in so that she could get some blood, since her hematocrit level when they checked it at 2 AM was only 22. Her oxygen saturations were dipping pretty low, too, I guess, which is why they put her back on the cannula. It makes sense though, between her low hematocrit and the pain meds, and as they cut back on the meds they should be able to get her off the oxygen really quickly (she's on a very low amount- 25cc). 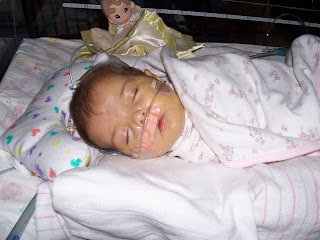 When I was home last weekend, I made some cookies that are supposed to boost milk supply. They're really good, and I can justify eating 4 or 5 of them a day by telling myself it's for a good cause ;) I'm not big on chocolate chips, so I substituted white chips and added in some craisins... they are some of the yummiest cookies I've had in a long time. The cookies have brewer's yeast in them, which is really nutritious and I guess one of the key ingredients that's supposed to help boost your supply. The oatmeal is important, too. A lot of breastfeeding women eat oatmeal for breakfast every day, I try to eat as much as I can, although some days I don't eat breakfast, and when I do eat oatmeal for breakfast, it's of the instant variety, so I'm not sure it's the same thing... But it's the best I can do for now. I was reading on the brewer's yeast can that you can mix it into pretty much anything, as it's not flavored, so I tried mixing some into my oatmeal the other day. That was a horrible idea! I won't be doing that again, at least not using as much as I did. It says on the can to take 2 tbsp... I added about 1/2 tbsp to some soup today at lunch, I think that's about as much as I'll be able to mix into stuff without having it change the consistency to the point where I can't eat it.

Anyway, I don't have much else to talk about, but I have some more pictures! :)
Uncle Terry finally got a chance to come visit Faith. I think Uncle Mike is now the only local relative who hasn't had his picture taken with her... I guess he needs to come visit! 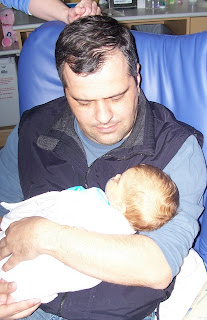 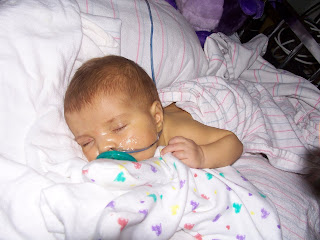 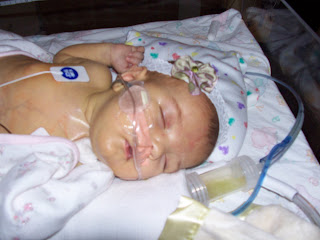 Brewers yeast is yummy on popcorn!! Our local movie theatre has offered it forever and it's the only place I have been that has it. A bowl of popcorn for a snack maybe?!!!

I may need to be trying that cookie recipe...They sound good & Molly would get more milk. It was great to see you and Faith a couple weeks ago. - Kelly

Hello, I have never met you but I feel like I know you now after reading all of your blogs. I was sent this way by a friend in Ft. Collins. I used to care for her daughter at Respite Care Inc (I'm pretty sure she's the one that said hi to you in the hospital from Vineyard Church. I think you are an amazing family and with both you and Faith the best! I will keep visiting to see how things are going =)
-Shelly

So happy to hear that the surgery went so well for Faith. As hard as it is to give everything over to God sometimes we need to finally let the things go that you have no control over. Keep the faith and Hope to hear you are moving back home soon. We will continue to keep your family and Faith in our prayers.
Wanda Dillard and Family