Tuesday, February 10
What a day. I put prayer requests in to everyone I could possibly think of, every message board I post on, the radio station (K-LOVE), I put prayer requests on my Myspace and Facebook pages, and sent an unsolicited mass email to everyone in my Gmail contacts list whose name I recognized... (sorry, I'm not normally one to do that, but this was important!) We really do believe in the power of prayer though, and I know all those prayers were not in vain! If nothing else, I can say that I did have a lot more peace than I expected, just sort of a confidence that everything would work out fine. I wasn't nearly as nervous or worried as I thought I'd be, even though I think this was probably the scariest surgery she's had so far. THANK YOU so much to everyone who thought of us and prayed for us today. It means so much, and no words can say how thankful we are for all of your love and support.
I got an email from one of the friends I've made from the Calvary Chapel moms' group, and it had this Bible verse in it, that I think is absolutely perfect and totally sums things up:
"I sought the LORD, and he answered me; he delivered me from all my fears."
Psalm 34:4
I can't honestly explain how confident and unafraid I was during the surgery, but I really think this verse does a good job of it. Thanks again, Lori!
Pre-op 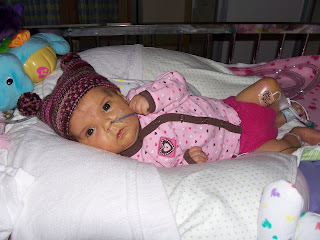 So, the surgery went very well. Really everything went best case scenario for pretty much the first time ever. Faith didn't need any blood, and they were able to extubate her right after the surgery with no problems at all. She still hasn't had any blood (and she didn't have any before the surgery, either), and although her hematocrit levels are a little low, they're still borderline and they're not worried about it at this point. She had a total of about 30 mL of blood loss, which isn't bad at all. She was in the OR (including pre- and post-op) for about 5 hours.

The surgeon ended up taking out about 5 cm of bowel where the dilated section joined up to the smaller section. And then they tapered about 12 cm of the dilated part so it should match up much better and hopefully will be able to work better to push things through, and finally they put the two pieces back together.
Post-op, a little pale, but resting well 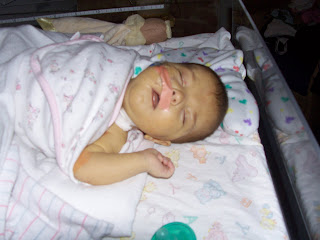 They also took a liver biopsy, since they were already in there and it will give them a clearer picture of the condition of her liver than just the blood test numbers can. Dr. Partrick said her liver looks about like he'd expect it to look, kind of greenish from the elevated bilirubin, but otherwise he said it looks good. So the biopsy will basically just tell us if there is some other possible reason for the liver issues, or if it really truly is just from the TPN. We should have those results in about 48 hours. Faith also participated in another research study with the biopsy, because there are doctors here who are researching biliary atresia (which I think I may have mentioned in a previous post, they did an ultrasound on Faith to rule that out as a cause for her cholestasis) and also TPN associated liver disease. That's the third study now that she's been a part of now, although for the first one she was still on the inside. (I'm still hoping someday she can be part of a large-scale study on what causes gastroschisis, as more and more people I've talked to who've had kids with this condition DON'T fit the demographic that's previously been identified... I have theories I think they should study, but that's another post...)
We are optimistic this time that everything went well, and will continue to go well. We feel like we've come full circle finally- Dave was here for the first surgery and signed the consent for that, and he signed the consent for this surgery (I signed all the ones in between). A lot of the nurses here are the same nurses who were here the first night, or within the first few days. The first surgery was at night, all of the others have been daytime surgeries, except this one... Things went great with the actual surgery... We are just very hopeful.
Faith's wearing cloth diapers now. (Well, not right now since she's fresh back from surgery, but she did earlier today and will again tomorrow.) A friend recently gave us a bunch of diapers that I had made for them when they had their son, so we are using those for now while another friend is doing some finishing work on Faith's diapers, since I don't have my sewing machine at the hospital. So she has a nice little stash of pretty boyish diapers for now, but they fit well, and that's the part that really matters. She does have one bright pink girly diaper that I had made a LONG time ago when I was first figuring out my newborn diaper pattern. I didn't ask anyone if it was ok to use them, but I did get them all ready last night and pre-weighed them, so I know how much each individual diaper weighs when it's dry, and then we can just weigh them when we change her and figure out the difference. I figured if I have a system all worked out, there's no logical reason they can tell me she can't use them. And this gives me one more little thing that I can control, and I feel like if I have my couple of little things that I can control, it will help me let go of the big things that I really can't control, but want to. 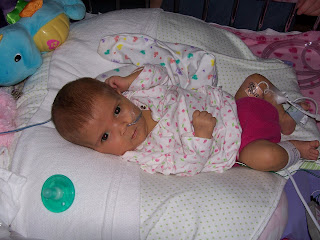 I am so glad God is using the blog to touch people's lives. It does help me to think that this experience is serving a purpose for people other than just us. I really do hope that other parents of gastroschisis babies can find comfort in sharing our experiences. I hope that no one else has to go through this the way we have, but if anyone does, I hope that they'll at least have a better idea of what to expect.
Anyway, I just wanted to post quick tonight for anyone who is wondering how things went. I'll probably post again tomorrow with more updates.

I LOVE full circle moments! I'm so glad to read Faith did great in surgery. Raeanne, I think you have embraced every lesson throughout this journey! Your strength and clarity inspire me. You and Faith are impacting many lives through your experience! Oh, and I love the cloth diapers. See there you go again...they will probably set new hospital policy now that Faith shows off her awesome cloth diapers!