Tuesday, January 13
Faith is two months old today. Feeds are going about as well as can be expected... I guess the positive side of that is that she is still eating! She is nursing pretty well, although she is still very tired during the day and has a hard time waking up to eat. She is getting 12 mL every 3 hours now, and that will increase to 15 mL at midnight. 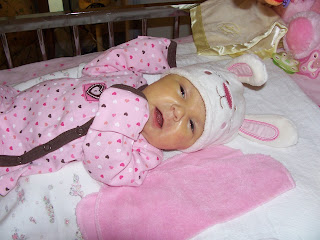 She's still throwing up at least once or twice a day, but I started to notice yesterday that she would throw up for sure when she had her Erythromycin if she hadn't eaten about 10-15 minutes before. Then today she threw up her noon feeding, when she had her medicine about 15-20 minutes before she started eating... So I started to think that maybe the Erythro was doing more harm than good and mentioned that to Sarah, our nurse today, so she told Dr. Potter our theory and Dr. Potter discontinued the Erythromycin. So, we will see if that helps her throw up less. 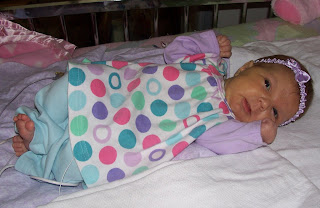 We had Sarah for the first time in 7 weeks or so today. It is sort of strange, the longer we are here, the more we are having nurses we haven't had since the beginning. It's kind of nice though, because we had wanted a lot of these nurses for our primary team, and now we finally get to have them. 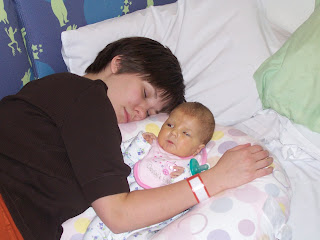 Faith seems to be feeling much better lately. Her heartrate hasn't gone into the 200's in a few days, even when she's mad. It has been staying down around 130-140 when she's awake, and in the 120's or sometimes even lower when she's asleep. 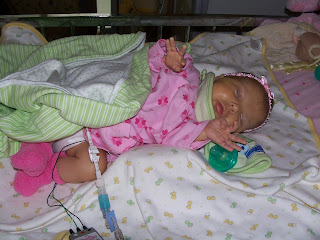 I took pictures earlier of the spots where Faith's chest tubes were; I realized I never had before. Her surgery incision is healing, but starting to get a little irritated from her diaper and the waist of her pants, so we have some gauze over it now to keep it protected. She has some sores on her butt from the enemas too, but they gave us some really good barrier cream to use on it that seems to help a lot. They're only doing the enemas once a day now, at 11:00 PM since that is the one she tolerated the best, and they're only using 30 mL of the medicine now instead of 60. 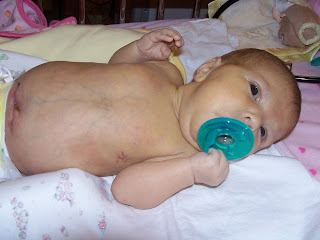 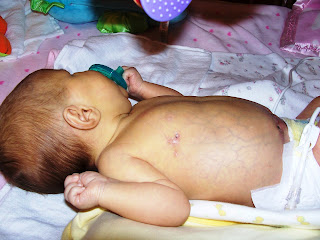 She is already sleeping through the night! I don't know if it will stay the same when we get home, but I hope so! She usually has quite a long stretch of calm awake time starting around 6:00 or 6:30 at night, dozing off and on, but for the most part awake and happy, until we do her enema at 11:00 and then get her in her pajamas, do her midnight feed, and then she's down for the night and doesn't wake up usually until around 8:00 AM! Last night she did wake up around 3:00 and cried once or twice, so I got up to pump and feed her, but by the time I got to the chair to sit and pump, she was already back asleep. Then she was up around 5:30 AM and was pretty mad, so the nurse came in and did her stuff she needed to do, and then Faith went right back to sleep again. And usually after she's up at 8:00 in the morning, she goes back to sleep until around 11:00 AM.

Faith can hold her pacifier in her mouth! 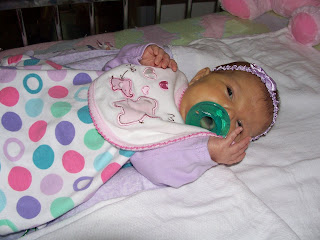 Noah is getting so old, learning so many things. It's hard for us as a family to be separated right now, but we are so thankful that my parents have been able to help us so much. I don't know what we would have done without their help. And I think it's been great for both boys to get to spend so much time together, they are both learning so much from each other. I think it's awesome that my mom is able to spend so much time with them, teaching them so many great new things. We will definitely have to think of something nice to do for them when we get home!
Anyway, thank you everyone for keeping us in your thoughts and prayers. Please pray that everything continues to go well, so that we can all be home together soon! 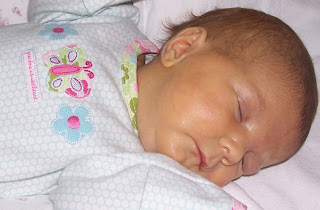 I'm so happy to hear Faith is still feeding and the amounts are increasing! This is GREAT news. It still makes me tear up when I read that you are nursing Faith...so much determination. It makes me so happy that you and Faith are able to bond and connect through feedings now. You and Faith WILL be home soon! Noah is a strong little boy as well and can't wait to see him again...I bet he has really grown since the last time I saw him.