Saturday, January 3
Faith has thrown up quite a bit over the past few days. She had been doing better, throwing up less, but then they stopped two of her anti-reflux meds. And, since they both got started and stopped around the same time, we don't know which one it was that was working (or if it was both). She is on Zantac, and has been for quite awhile, it is in her TPN. But obviously it doesn't do much for her, because she still has reflux and throws up a lot. So they had put her on Reglan and Protonix, and about a day or two after they started those is when she was throwing up less. But now she's back to just having the Zantac, because for some reason they didn't think she needed more than one reflux med. 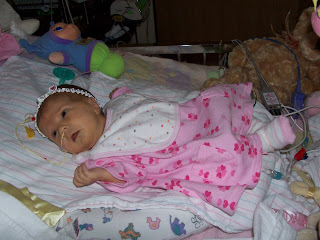 We are paying lots of attention to her positioning, making sure she is always at an angle. Her crib is as angled as it can be, and she spends quite a bit of time in her bouncy seat or now in her swing. (The "magic swing" has re-made an appearance, and works great yet again!) When we hold her, we make sure she is almost sitting. She likes to be in a sling in a more upright position. And sometimes we put her to sleep on her tummy, which seems to really help. 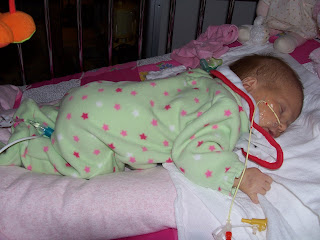 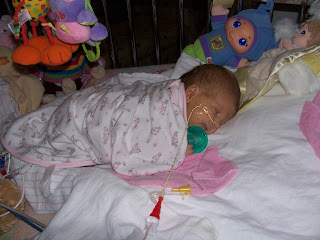 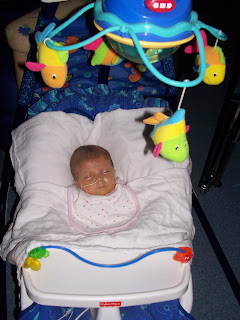 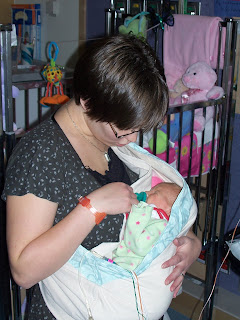 Once again she has stumped the docs, they want something to be wrong with her that they can go in and "fix", but she doesn't have any reason really for her throwing up, beyond reflux. She most likely has GERD, which is pretty much the worst type of reflux babies can have, and beyond positioning and medications, there isn't much else they can do for it. (There is a surgery, called a Nissen fundoplication, that they can do as a last resort, but it will take A LOT for us to consent to that.)
They did another upper GI/small bowel follow-through study this morning to be sure there isn't anything else going on. With her projectile vomiting they thought it might possibly be a condition called Pyloric Stenosis, where the muscles at the outlet of the stomach are thickened, keeping the contents of the stomach from emptying into the intestine (projectile vomiting is a classic symptom of this condition). This time Dave and I went with for the study. It was interesting... she drank a little of the barium from a bottle, and we could see it go down, all the way to her stomach. Then they put some down the feeding tube into her intestine, and we could see her intestine get outlined as it made its way through. We found out pretty quickly that she definitely doesn't have Pyloric Stenosis, because the barium actually went backwards a little bit from her intestine into her stomach.
Dr. Sandoval came by after the study and said at this point all they can say definitively is that she has reflux, so they will just try to treat that and see what happens. They have re-started feeds, still transpyloric (into her intestine), but now they are just breastmilk. And, on my suggestion/question, they will be putting her on Prevacid, and hopefully/possibly Erythromycin too, to treat the reflux.
There are three main types of reflux meds (besides regular antacids): acid blockers, proton pump inhibitors, and motility agents. Zantac is an acid blocker, Prevacid is a PPI, and Erythromycin is a motility agent. (Actually, Erythromycin is an antibiotic, but it happens to have a side effect of increasing gastric motility, which means it helps the stomach empty faster. The other motility agent they normally use is Reglan, which has a number of bad side effects, so we don't really want them to use that if we can help it.)
They haven't actually started the Erythro yet though, because there is an issue with the dosing. The IV dose is 30 mL every 6 hours, which is quite a lot of volume for a baby as small as Faith. They also have an oral dose, but the problem with that is that Faith is naughty with oral meds, and either gags herself on them, or throws them up as soon as they're down. So hopefully they will figure something out for giving her that med, and hopefully these medicines will help. Once she starts to gain some weight and hopefully with these meds throws up a little less, she will be able to start eating from a bottle, and we will be much closer to going home. 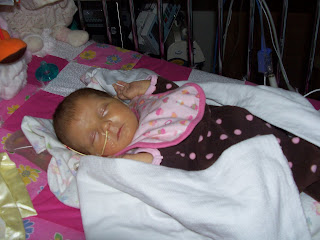 In the meantime, we've gotten pretty good at preventing the frequent changes of clothes and bedding. Faith wears a bib all the time, and we cover as much as we can with burp cloths. It's a good thing the hospital has so many, because we are probably going through at least 20-30 a day. We will definitely need to stock up on some for when we get home! 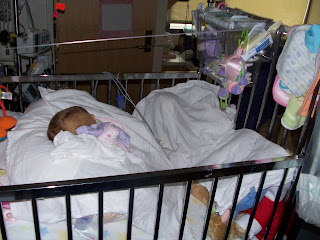 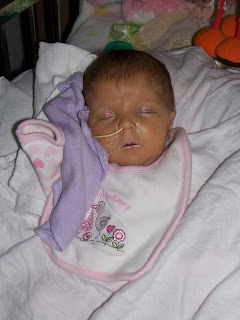 I altered a few pairs of Faith's pants that go with some of her shirts, so that she can wear them with her Broviac. I had been just feeding the Broviac up and out the waist of the pants, but it has been kinking lately, so I wanted to avoid that problem. So, I had Dave bring my snap press down, and I put snaps up the right leg of the pants, so that the Broviac can come out the side of the pants and not get kinked. 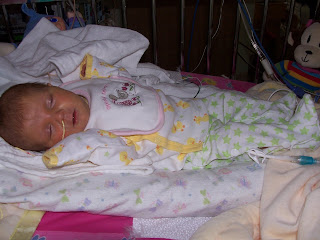 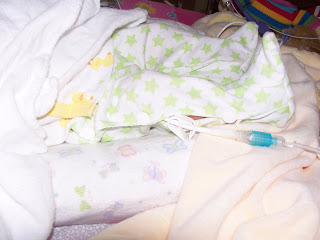 Faith got a Gloworm for Christmas and likes it a lot, and yesterday she got her Christmas gift from Gram (my grandma) and it is a seahorse that is a lot like the Gloworm, but it stays on for five full minutes! It's pretty cool and she likes it. She got lots of cool Christmas presents, and we are very thankful for all of them. 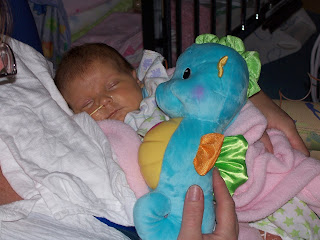 We are also incredibly thankful for everyone who has brought meals to the hospital. They were so incredibly helpful, especially after my mom and the boys went home, since now I am here by myself most of the time during the week, and a lot of times I have a hard time remembering to eat. The fact that everyone has been so kind and helpful to us when they don't actually know us is amazing, and you are all truly a blessing to our family. 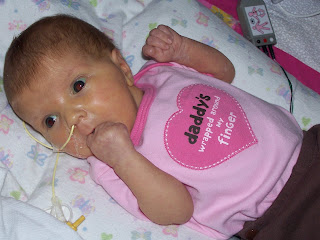 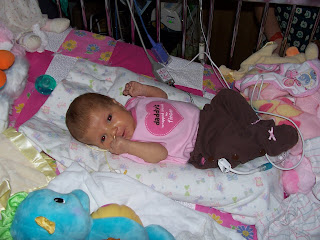 JUst checking in on you from BF! You really my little boy had/has GERD. That was quite the 3 years:) We eventually took to calling it "the enigma" some days meds worked, some they didn't. That is very normal for GERD babies though the medical people can't always accept and will test, test, test despite no results. it WILL go away. 8months is very typical.

wishing you the best. carrie@birthteacher.com

she looks really dark (biliruben?) from post to the recent one.