A New Approach, and Finally Some Answers

Tuesday, November 25, evening
So, today was one of the only times we've ever left Faith alone, without somebody at the hospital in case something happened. My mom and I had a couple of errands to run, so we went out quick to do them... we were gone maybe 4 hours. I'm not used to having a cell phone, so I had forgotten my phone at the hospital. We got back, and I thought it was weird that when I walked by the nurse's desk there were a couple of other nurses there, including the charge nurse, and I heard her say "Oh, there she is."
I went into the room and checked on Faith, because that made me a little nervous, but everything looked fine. I noticed her Fentanyl was dropped again, to 1.5 now, and her rate on the vent dropped from 35 to 32, but otherwise everything looked pretty much the same as when I'd left her. Then I went to check my phone, since I figured Dave had probably called, and I noticed a missed call from the hospital, and I really started to wonder what was going on. It took probably 10 minutes or so before Liz, the nurse, came into the room and told me that they had tried to call because surgery wanted to do a tap to drain off some of the excess fluid, and they needed my consent.
Then I got more nervous, and called Dave and my mom to tell them what was going on, and to get my mom to come up to the room so that when the doctor came in she'd be there to hear what he said, since sometimes I don't necessarily absorb the information as well when someone's just telling it to me, so I try to always have a second set of ears when it's something really important.
The nurse told me that the surgeons had talked to the neonatologists, and they had weighed the pro's and con's of the procedure, and thought that Faith would benefit from it. The neonatologists have been paying more attention to her the past couple of days. The surgeons are still in charge, but it seems like the neonatologists want to know more of what's going on. They even stopped outside her door earlier and talked about her while they were on their rounds.
While we were doing her cares, I asked when Faith's next feed was; Liz told me they weren't feeding her anymore. That was disappointing news. They had been getting more green stuff from the tube into her stomach, so they had to stop feeding until it went away again. I know she had one feed, I think maybe 2... 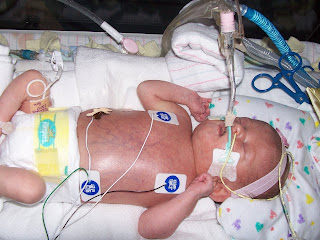 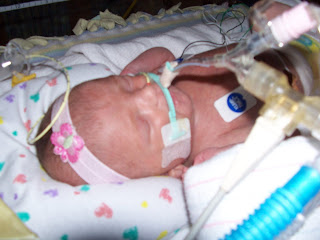 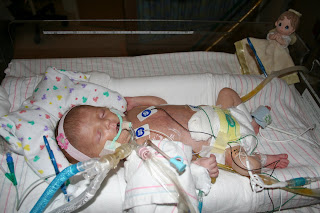 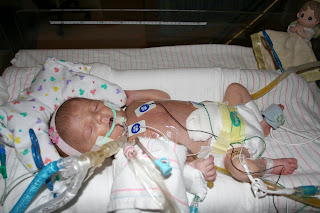 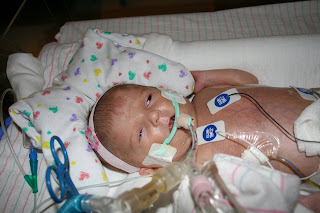 We aren't able to hold her anymore until her chest tubes are out, but just knowing how much better she is doing with them in makes it ok, and hopefully they should only be in for a week or so, until the medication works and the fluid stops coming back. And, once the tubes are able to come out, the ventilator should follow quickly.
Dave and my dad had to leave tonight to go home; Dave has to work in the morning and my dad is going elk hunting. They'll go hunting together on Saturday, and then come down either Saturday night or Sunday morning. I think Faith will be doing much better by then, and Dave will be really happy with her progress.
Please pray that this is the answer, and that the doctors' plan will work, and that Faith will not have to be on formula for an extended period of time.
Posted by Raeanne at 9:51 PM

I am so sorry to hear that Faith will need chest tubes and that feedings will be postponed. I hope the new approach yields rapid results and that Faith will be able to tolerate breastmilk soon. She is in our prayers. Ashley

I am so sorry to hear about Faiths minor setbacks, but am very grateful they know what is causing her swelling. I'm glad they have a plan...that must make you feel much better. I'm sorry to hear Faiths feeding are postponed for a while and I will prey she won't have to be on formula for too long. Faith and you all are in our thoughts. Hang in there. Oh, that is so cool she is staring into your eyes more. That bonding is vital for you both.
Jenae (birthchat friend)

Keeping Faith in my thoughts. I am sure your pumping will be all worth it, and good on you for sticking with it through all this. Marlis (babfit, natural birth fourum)