I just got back to the room from eating lunch and Sarah just finished Faith's cares. She said she had a really good blood gas, and she peed a great amount, so Sarah took out her catheter! :) Faith had been peeing around the catheter for most of the time that it was in. It's so good, she's really draining a lot of the excess fluid and starting to look a lot less swollen.

Her heartrate is back and forth right now because we were just messing with her, but she's coming back down again without needing more meds to calm her down, so that's really good. Her blood pressure has been awesome today too. :)

She's trying so hard to wake up- the doctors don't want her to wake up until 3 though, so we keep reminding her that and telling her to go back to sleep... not sure why 3 is such a great time to wake up, but I think maybe Faith's showing us already that she doesn't really care what she's "supposed" to do... she's definitely a fighter!
Here's a picture I just took... one tube less than the last pictures, hopefully she will keep having less and less! (I can't wait till she gets that breathing tube out!!) 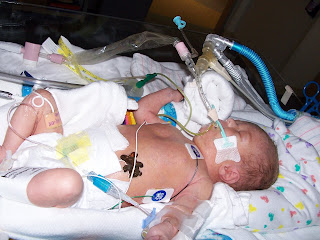 One of the other babies that got here right around the same time as Faith got to go home today. She was a 6 week old and had a twist in her bowel, which is one of the potential complications that can happen post-op for Faith... they did surgery on her though and she was only here for 9 days! I hope that everything goes well for them and they won't ever have to come back here.

I wanted to say thanks again to everyone who's thinking of us, praying for us, and posting comments. I posted links to the blog on a couple of the websites that we used to prepare for Faith's birth, and I hope that anyone who finds us through those gets some good information and is helped by what I'm posting here!

Sounds like Faith is healing wonderfully. I'm happy you are getting to hold her, how exciting.