In the ER at one of the Children's satellite locations near Dave's parents' house... We rarely go to the one at the main hospital because the wait is always so long, and at the satellites we are triaged and in a room usually within 10-15 mins. I dropped Noah and Selah off with Dave's parents on the way here, so that's another benefit. 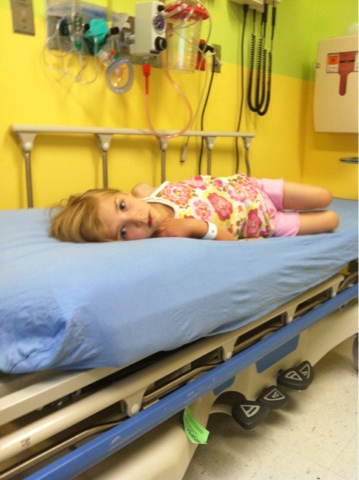 Faith has continued throwing up, and yesterday didn't eat anything and slept almost the entire day. Yesterday we had to give her an enema (fun, fun), which did have results, but didn't stop the vomiting. This morning when she threw up, it had streaks of blood in it.
I called the urologist's office and the GI doctor's office this morning. The urologist's office ordered Zofran and wanted us to push her to drink lots of fluids at home; the GI's office said with her history we should go to the ER. Since it's Friday, and since the urologist's office hasn't seemed to have a good understanding of Faith's gut history, I was far more inclined to agree with the GI's office.
They have already done gut X-rays, and finally (5 sticks later) got an IV started for fluids. They tested her pee (what little bit there was) and it came back positive for bacteria, so they need to do a culture, but we'll probably have to wait until the fluids go in so she can actually pee. She didn't even have tears to come out when she cried the last two times they poked her for the IV! 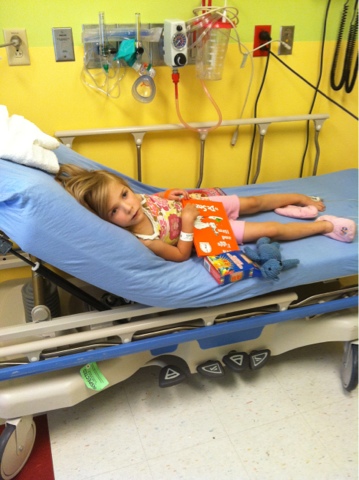 The X-rays looked ok to me, just lots of air in her guts, but I'm waiting to hear what the doctor says. He said he could feel stool in there when he palpated her belly, which someone who's had Miralax and an enema (and hasn't eaten!) in the last 24 hours probably shouldn't have...
SO... Current prayer requests would be for her to feel better when she gets hydrated, with no more vomiting; for her (kidney?) pain to go away; for her to pee enough for the culture test; and for the infection to go away.
Posted by Raeanne at 4:20 PM