Faith is doing better than she was earlier, she even ate some of her lunch. Her pain is being controlled much better, unless she moves... The anesthesiologist came in late this morning and took the epidural catheter out of her back, so the only thing left in her is her IV.
Since the extra tubes came out, we got her cleaned up and changed her into one of her own nightgowns I made for her. Then awhile ago, she had a few visitors who brought her a new kitty (thank you Aunt Steph & crew!).
Earlier this morning, Noah had an appointment at one of the doctors' offices here, so on the way back to her room he and I stopped in the gift shop on the adult side of the hospital and miraculously found her the only unicorn in the whole place. (Since her last surgery in Boston 2 1/2 years ago when they took her feeding tube out, she has gotten a new unicorn each time she's had any kind of unpleasant procedure.) 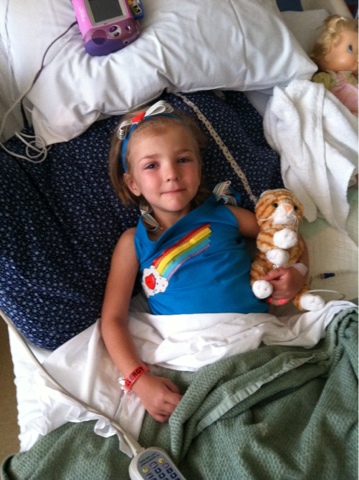 The nurse practitioner came in a little bit ago to check her out and see if she could go home today. She said Faith looks great, but she would really like her to get up and moving a little bit before she'd feel good about releasing her. She helped me get Faith to standing, but Faith wasn't enjoying it and decided that if she has to stand to go home, she'd rather just stay here...
One concern that I have had since last night is that they don't seem to be taking Faith's history into account when it comes to things like her eating... The nurses have said her bowel sounds aren't that great, yet she is on a totally normal diet. The anesthesia makes the gut groggy and less active, and then the meds she's on are constipating too, so for her to be putting food in when there's no indication that anything is trying to come out makes me nervous... The nurse practitioner ordered a suppository, so hopefully that will get things moving.
We did get her to sit up and play Candyland with Daddy, and she isn't crying in pain, so maybe we'll be able to get her standing soon... (I think she has her own rules... like if you get a card with 2 green squares, you just pick whatever 2 you want as long as they are close to the finish!) 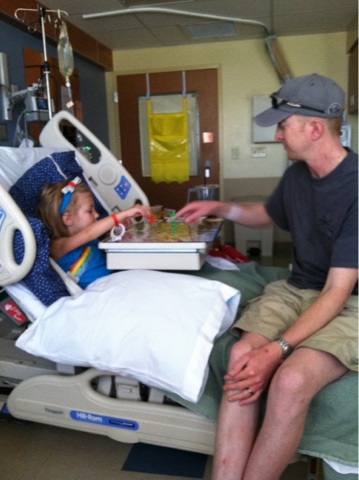 Current prayer requests would be for her pain to subside, for her to be able to get up and take some steps, and for her gut to start moving. It would be wonderful to be released today...
Posted by Raeanne at 2:43 PM