We are in Faith's room, and she is eating. She did need some Zofran; she started out with a couple of Popsicles but they didn't stay down very long.
Since food service ends at 7:00, we sort of preemptively ordered her food, so she's got a nice tray of Mac & Cheese and chicken tenders that she doesn't feel like eating yet, and she's munching on cheese & crackers and sipping a chocolate milkshake, complete with whipped cream and sprinkles. 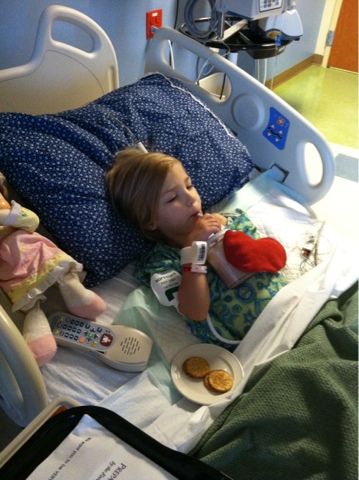 Dave's parents took Noah and Selah home, and Dave will be leaving here in a little bit. It has been a long day!
Prayer Requests:
Faith's epidural pump keeps alarming (and then stopping before the nurse comes in), for no apparent reason. Please pray that either they figure out what is causing it, or that it just stops!
Please pray for Faith's pain to be minimal.
Please pray that she won't have anymore nausea and will be able to eat and drink as much as she wants/needs to. If she does a really good job drinking, there's a chance she could get released tomorrow... which would be a pretty great birthday present for me! ;)
Posted by Raeanne at 7:40 PM